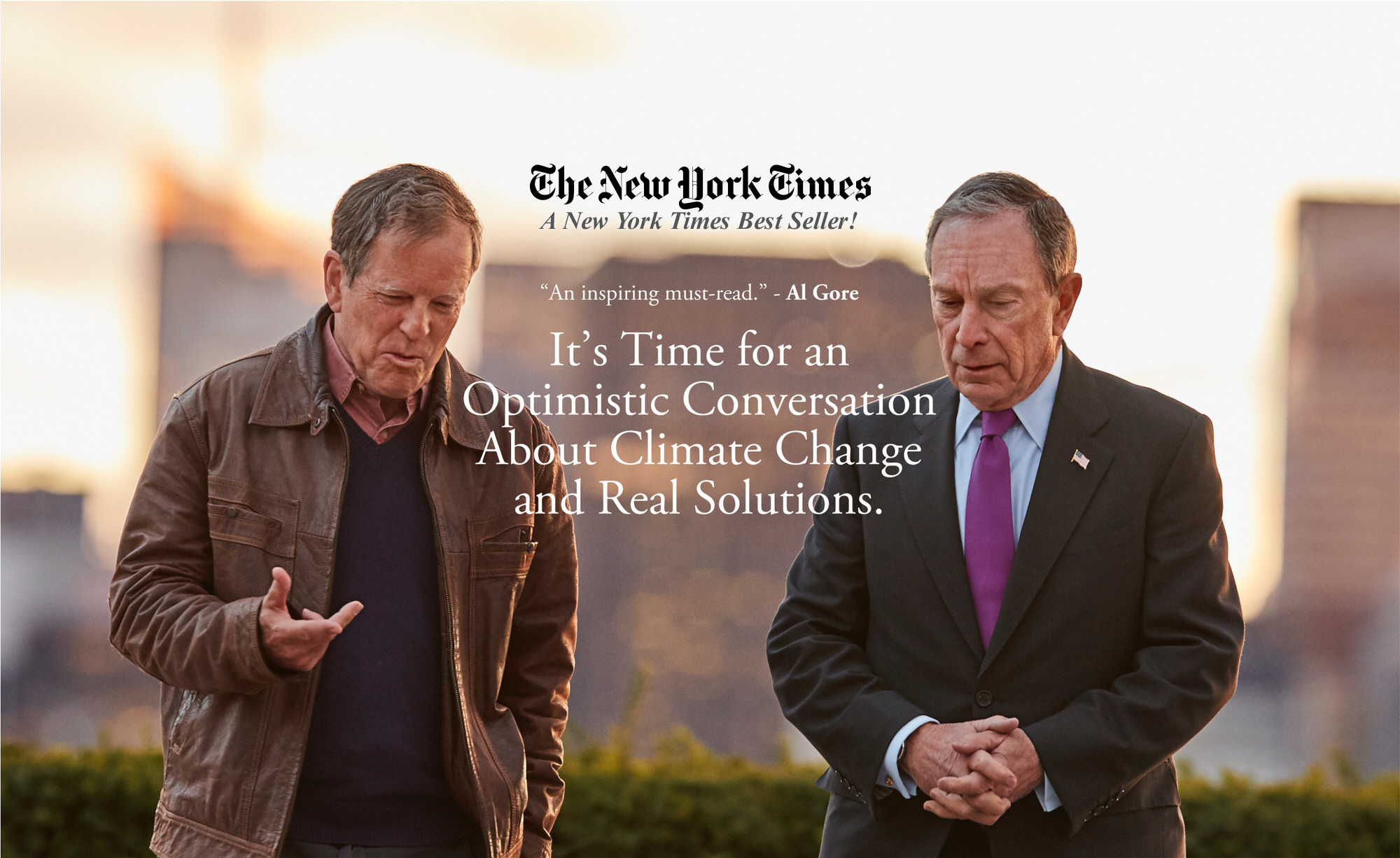 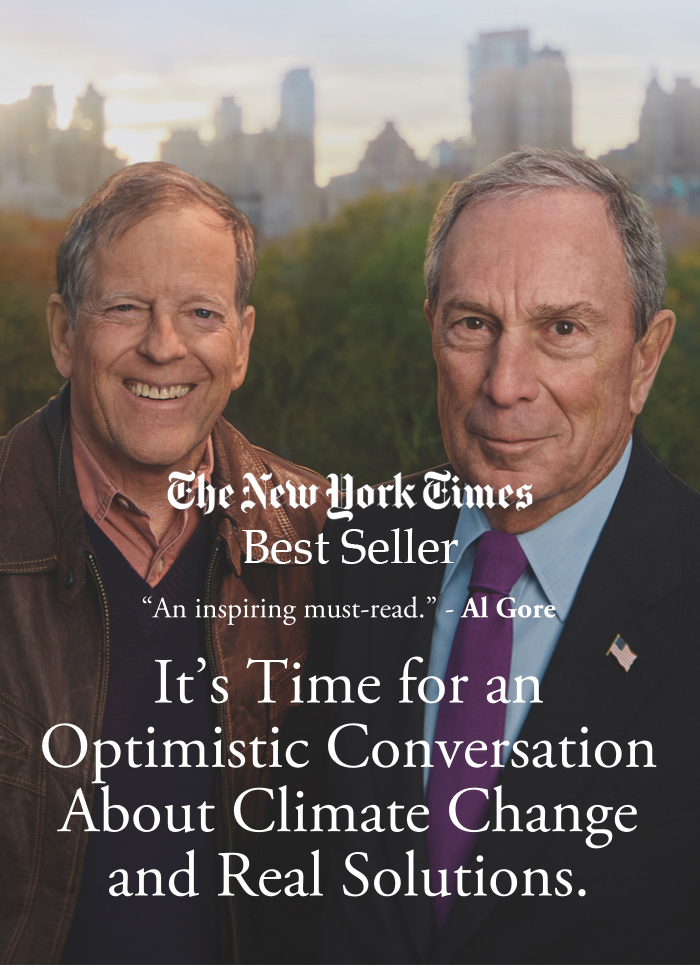 In their book, Michael Bloomberg and Carl Pope offer a new approach to tackling the challenge of climate change.

Help spread the word and help tackle climate change by sharing the book on social media:

“We need an optimistic conversation about climate change – with hope, not fear.”

“Each part of the problem of climate change has a solution that can make our society healthier and stronger.”

“We are writing this book because we believe that it’s time for a new type of conversation about climate change.”

WHAT PEOPLE ARE SAYING

In their new book, Climate of Hope, Michael Bloomberg and Carl Pope provide readers with a wonderful, in-depth analysis of how municipalities, businesses and private citizens are proving to be a bold force in solving the greatest challenge of our time - the climate crisis. This book gives readers the opportunity to benefit from the wisdom of two highly successful individuals who have taken distinct paths to ensuring that their own communities and organizations have a tangible impact in securing our sustainable future. Climate of Hope is an inspiring must read for anyone who wants to know how their local actions can have positive and significant impacts on the world.”

Meeting our world’s growing energy demands will require contributions from science, business and government. As Climate of Hope shows, Michael Bloomberg has a unique understanding of the importance of this collaborative approach. Michael’s leadership and optimism remind us that by working together, we can develop break-through innovations to reduce the cost and increase the reliability of clean energy technology.”

Climate change threatens to reshape the future of our world's population centers. Bloomberg and Pope have been leaders on fortifying our cities against this threat, and their book proves that victory is possible―and imperative.”

Thanks in no small part to Michael Bloomberg, mayors around the world are proving day after day that cities can tackle climate change. There are three things we need to do: act, act and act again. This is the first book that explains how.”

Michael Bloomberg and Carl Pope show that cities demonstrate how a bottom-up approach to climate action is not only possible, but also necessary―and how all of us have a role to play.”

Climate of Hope couldn't be more timely - or more necessary. Its optimistic and can-do spirit is exactly what made a global agreement possible. Now, Bloomberg and Pope provide a roadmap for making it a success.”

The 2016 election left many people who are concerned about the environment fearful that progress on climate change would come screeching to a halt. But not Michael Bloomberg and Carl Pope.

Bloomberg, an entrepreneur and former mayor of New York City, and Pope, a lifelong environmental leader, approach climate change from different perspectives, yet they arrive at similar conclusions. Without agreeing on every point, they share a belief that cities, businesses, and citizens can lead – and win – the battle against climate change, no matter which way the political winds in Washington may shift.

In Climate of Hope, Bloomberg and Pope offer an optimistic look at the challenge of climate change, the solutions they believe hold the greatest promise, and the practical steps that are necessary to achieve them. Writing from their experiences, and sharing their own stories from government, business, and advocacy, Bloomberg and Pope provide a road map for tackling the most complicated challenge the world has ever faced. Along the way, they turn the common line of thinking about climate change on its head: from top down to bottom up, from partisan to pragmatic, from costs to benefits, from tomorrow to today, and from fear to hope.

Bloomberg and Pope explore climate change solutions that will make the world healthier and more prosperous. They aim to begin a new type of conversation on the issue that will spur bolder action by cities, businesses, and citizens – and even, someday, by Washington.

Listen to the preface as read by Michael Bloomberg. 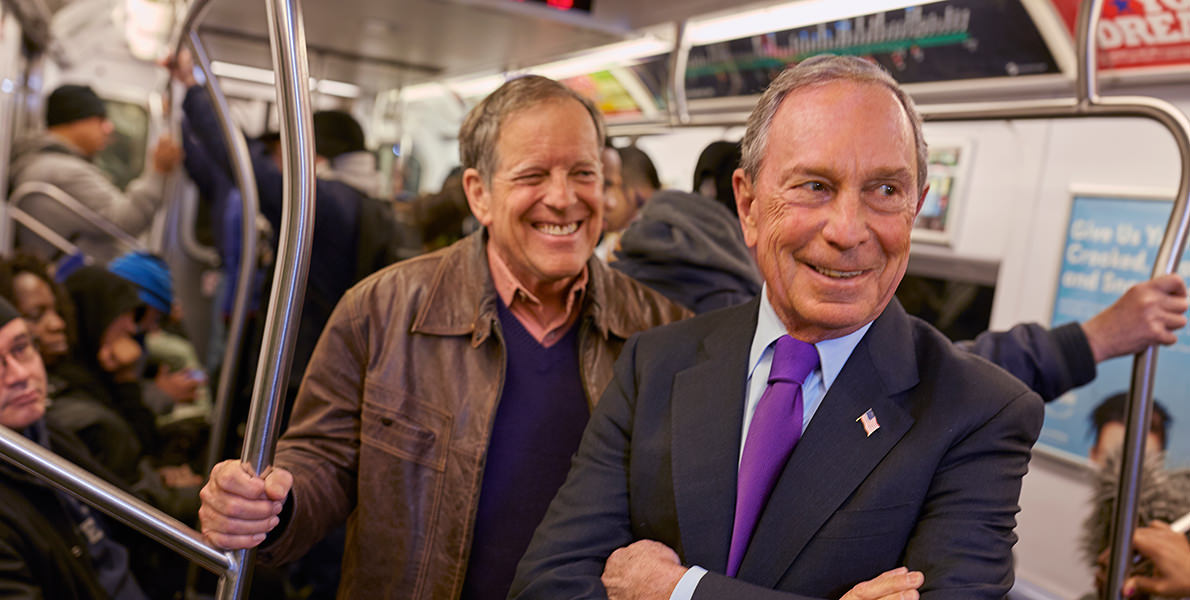 Michael Bloomberg is the founder of Bloomberg LP, a global media and financial services company. He served as mayor of New York City from 2002-2013, earning a reputation for independence and innovation. In 2014, the UN Secretary-General appointed him Special Envoy for Cities and Climate Change, and he leads the boards of numerous climate-related organizations. He is one of the world’s most prominent philanthropists, and the environment is one of the five main focus areas of his foundation, Bloomberg Philanthropies. Learn more about Bloomberg’s environment work on MikeBloomberg.com.

A veteran leader in the environmental movement, Carl Pope is the former executive director and chairman of the Sierra Club. He is now the principal advisor at Inside Straight Strategies, focusing on the links between sustainability and economic development, and serves as a senior climate advisor to Bloomberg. He was a founder of the BlueGreen Alliance and America Votes and has served on the boards of the California League of Conservation Voters and the National Clean Air Coalition. The author of three books, he writes regularly for Bloomberg Opinion and Huffington Post.

For updates on Climate of Hope, sign up to receive Mike’s newsletter.

‘Climate of Hope’ – now in paperback